Putrajaya, Malaysia (April 5, 2015) Putrajaya was centre stage today for the 2015 TIME IRONMAN 70.3 Putrajaya where approximately 1400 individuals with 80 teams took on the 1.9km swim, 90km bike and 21.1km run in challenging temperatures and humidity here in Putrajaya. 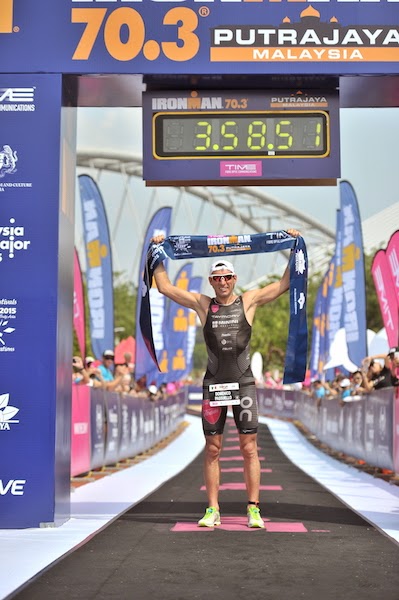 Domenico Passuello (ITA) in all his glory
Picture by Creative Clicks

Domenico Passuello (ITA) and Emma Bilham (CHE) emerged as champions at the event today. Present at the winning podium to award Passuello was En. Zulkefli Hj. Sharif, CEO of Malaysia Convention and Exhibition Bureau (MYCEB) and YM Tengku Zarina, Head of Partnerships TIME dotCom awarded Bilham at the winning stand. The finish line was filled with energy and excitement as the crowd welcomed all the participants.

“They really deserved this win. It was such an outstanding performance on the course here today especially with the weather, its no easy challenge. Congratulations to these two amazing individuals for their win today” said Geoff Meyer, CEO IRONMAN Asia-Pacific.

For Passuello, who was coming in second after the bike course just behind Australian Josh Amberger, the Italian managed to outrun and take the lead at the run halfway point when Amberger retired from the race, giving Pasuello full advantage of making it as the 2015 TIME IRONMAN 70.3 Putrajaya male champion with a time of 3:58:16. 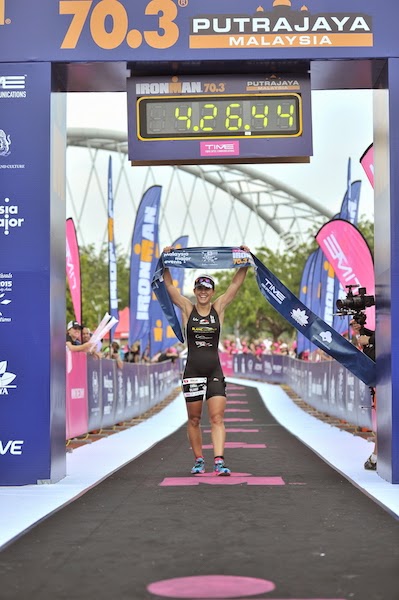 The petite Swiss - Bilham kept a great pace throughout the course, leading in the run and coming in at a time of 4:24:47 and taking the win for the 2015 TIME IRONMAN 70.3 Putrajaya female champion.

“The humidity was a real challenge and the run felt like a real killer with the heat, but I was happy to be racing here in Putrajaya. I passed a lot of participants who continued despite challenges like not having the right equipment. To me they are the true IRONMAN for making it possible”, said the Italian champion.

Emma Bilham was happy to be stepping up to the top of the winner’s podium, “I had a great start at the swim, and on the bike course I was quite happy to be riding beside Amelia Rose Watkinson (NZL) as to not lose my way on the course but unfortunately she suffered from a puncture. I just kept my pace and kept it going till the end!” exclaimed Bilham shortly after passing the finishing arch.

Five time IRONMAN World Champion Craig ‘Crowie’ Alexander and official ambassador of TIME IRONMAN 70.3 Putrajaya came in shortly after Pasuello at a time of 4:09:38 followed by Swede - Frederik Croneborg at a time of 4:10:12.

“It’s a great course here today and I have to congratulate Domenico Passuello who was in such excellent shape for today’s race. I felt really fit coming in especially for the swim and run, but not so much for the bike so I really had to conserve as much as I can. There was a tremendous amount of support and amazing energy. I’m really happy that I chose to race this year and happy to be sharing the podium with Passuello and Croneborg. Well done everyone”, said Alexander.

Sweden’s Frederik Croneborg has completed every IRONMAN 70.3 race in Asia and was glowing of the race and the course after crossing the line in third place today. “I was really set on improving my placing this year. I came in fifth last year. Knowing that I was just closely behind Crowie was such an honour”, said Croneborg.

Coming in second place for the female pros was Katy Duffield of Australia at a time of 4:33:54 followed by Parys Edwards of Great Britain that came in with a dramatic finish at a time of 4:34:20.

The first Malaysian to finish the 2015 TIME IRONMAN 70.3 Putrajaya for the second consecutive year in a row was Mr. Amran Ghani at a time of 4:44:38.

The 2015 TIME IRONMAN 70.3 Putrajaya is brought to you by title sponsor TIME dotCom Berhad and with the support of Malaysia Convention and Exhibition Bureau (MYCEB) and Putrajaya Corporation. The event is proud to have Putrajaya Shangri-La Hotel, PowerBar, Brooks, Rudy Project, 100Plus, F&N Ice Mountain, GH Speedbikes, Compressport, Prima Odyssey Travel & Tours and Gleneagles Kuala Lumpur to partner and support the 2015 edition of the race.

For additional information on TIME IRONMAN 70.3 Putrajaya, please visit www.ironmanputrajaya.com or follow @IRONMANLive on Twitter for up to date info!